THE CITY OF GASPÉ WILL WELCOME CÉDRIC PAQUETTE AND THE STANLEY CUP ON THURSDAY, AUGUST 19, 2021 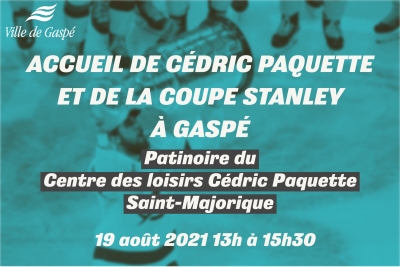 The City of Gaspé will have the honor of welcoming hockey player Cédric Paquette and the Stanley Cup to Gaspé! Despite the little time allocated to Mr. Paquette with the Cup, he intends to share this wonderful moment with the population of his native region on August 19 at the Cédric Paquette Recreation Center in Saint-Majorique between 13 p.m. and 15:30 p.m. This will be an opportunity for the population to come and meet Mr. Paquette and take a picture with the Stanley Cup! In order to respect the sanitary measures in force, we will ask people to circulate along a route that will bring them near the Cup and not to congregate on the ice. People will also have to keep a distance of one meter between the family bubbles.

"We are very happy that Cédric has the unexpected opportunity to bring the Stanley Cup with him to Gaspé, and that he has the generosity to share it with the population, despite the little time he will have with the legendary trophy. The Stanley Cup in Gaspé is a historic moment in itself! Even almost a year after his victory, it will be a great honor for us to have access to the Cup and we are still proud of Cédric and his successes, of which the entire Gaspé population is proud. Cédric: the entire municipal council and the entire population thank you for giving us this moment, and you still have our most sincere congratulations on this extraordinary success ”declares the mayor of Gaspé, Daniel Côté.

The event will take place at the Saint-Majorique Recreation Center, the village from which Cédric Paquette originates. Radio-Gaspésie will broadcast a special program for the occasion and there will be entertainment on site. It will be possible for the population to see the Cup more closely from 13 p.m. to 15:30 p.m. on Thursday, August 19.

“Despite the social and health rules and the scheduling constraints limiting the availability of Cédric and the Cup, I invite the population to attend in large numbers to this exceptional event organized by our municipal team in collaboration with Cédric's family! I would like to thank Cédric, his family and the entire team behind the organization of this event where we will once again be able to demonstrate our pride in our champion ”concludes the mayor of Gaspé, Daniel Côté.

Remember that Gaspé hockey player Cédric Paquette, now under contract with the Montreal Canadiens, won the Stanley Cup on September 28, 2020 with the Tampa Bay Lightning. A parade with Cédric Paquette, but without the Cup which could not travel due to the pandemic context, was organized on October 22, 2020, to underline this historic conquest by a Gaspésien hockey player.