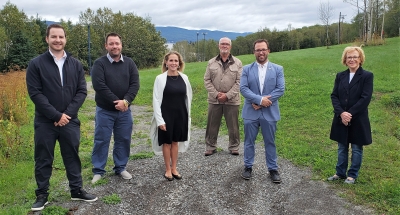 The City of Gaspé is proud to announce that it has reached an agreement on the terms of an offer to purchase a large part of the municipal land located near Carrefour Gaspé, with the promoter of the company Les Logement CVP, in order to to build a real estate development there in 4 phases of 36 housing units, totaling 144 housing units over the next 5 years. In discussion with the developer for several months and having received the agreement in principle of the City Council, the sale of the land will be formalized this evening at a public meeting of the City Council.

The economic development that Gaspé has experienced in recent years, in addition to recent announcements of the creation of hundreds of jobs, has fueled a major need for new rental housing. Despite the creation of several units in the last two years (58 permits granted in 2020 and 70 from January to August 2021), in addition to the 151 social housing units installed or in the process of being (2017-2022), demand remains as strong as ever.

“The attractiveness of Gaspé is at its maximum. After the good news for 111 daycare spaces, here is good news for 144 housing units! In addition to major economic projects, the pandemic has stimulated the possibilities of teleworking and our living environment has become even more attractive. Many workers and families want to settle in our region, but the housing supply is not sufficient to meet the demand; this is one of the main obstacles to our development. The project announced today, located downtown, close to all services, largely meets the needs of our territory. I would like to thank the Gaspé developers of CVP housing for believing in our potential and for choosing Gaspé to develop several dozen units in a concept that is interesting for their future tenants ”, underlines Mayor Daniel Côté.

CVP housing is made up of 3 Gaspésiens, Michel Collin, Christophe Poirier and Allyson Cahill. The company already owns an apartment building in the Rocher-Percé MRC and is looking to expand. One of the owners is also behind a major rental housing development in New Brunswick. In Gaspé, the concept that will be developed will offer modern, quality units in an exceptional environment close to public services. The concept, which will be unveiled later, will also leave room for nature and green spaces.

“Our desire is to develop a unifying project that will appeal to the inhabitants of the Domaine de la Baie. For us, Gaspé was a strategic choice because of the potential of the land which has an exceptional view and an ideal location. The excellent collaboration with the people of the municipality, in addition to the tax holiday offered to the City and the market that we consider ready to accommodate the type of project we are targeting, are all elements that fueled our decision. The growth of the main employers and the attractiveness of the city also tipped the scales to start the project. The goal is to create a living space in the heart of downtown, while retaining as much green space as possible in order to meet the expectations of people from here and those who want to settle in our region ”mentions Allyson Cahill-Vibert, treasurer and communications manager for CVP Housing.

THE SALE OF THE LAND AND THE CONDITIONS ATTACHED TO IT

The City of Gaspé had long sought to develop the vacant lot next to Carrefour Gaspé, conveniently located downtown, adjacent to the bike path and able to accommodate a large number of housing units. Several promoters had been approached for this purpose. For clarification purposes, this is lot 4, cadastre of Quebec, from which a portion of 051 linear meters which includes the cycle path at the bottom of the land will be excluded.

The challenge was to get the right price for the land, while stimulating the rapid construction of units. The sale price, evaluated by an independent firm, was established at $ 566. After agreement with the promoter, the sale price is officially set at $ 000, plus applicable taxes, to which is added the payment of a refundable performance bond of $ 300.

As a stimulus to the rapid construction of housing units, the performance bond of $ 266 will be gradually given to the developer, at the rate of $ 000 at the start of each of the 66 phases of 500 housing units, applicable to the value of the land, when construction deadlines are met in 4, 36, 2023 and 2024, subject to an occupancy rate of 2025% of buildings built or under construction. Thus, if the promoter meets all the agreed deadlines, the land will have cost him $ 2026, once the performance bond of $ 90 (300 X $ 000) has been reimbursed.

A tax credit for units built before 2025 is also planned, as for any housing project carried out on the territory of the City of Gaspé under the private law adopted in 2019. Under the said law, this credit is capped at $ 500 for the overall project.

“This major project is the result of several months of work, discussions and negotiations. I am confident that the developers will deliver the goods to respond in large part to the housing shortage which is slowing down our development, and that they will do everything possible to ensure that this development takes place as quickly as possible. We are very proud to make this announcement today and will continue to work hard to maximize the economic development of our city and meet the needs of industries, businesses and our citizens. I thank the promoters for believing in us and investing in our community ”concludes the mayor of Gaspé, Daniel Côté.