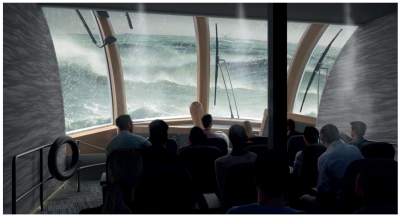 Meeting in regular session, the municipal council of the City of Gaspé awarded the contract for the realization of the immersive multimedia project of the Capital of maritime fisheries of Quebec to the company Cadabra following a public call for tenders. This project promises to bring strong emotions to the spectators who will be able to transport themselves on a fishing trip on the high seas and thus feel the emotions that fishermen can experience when they face the different elements of nature while carrying out their trade.

"The awarding of this contract marks the official start of this major tourism revitalization project for Quebec's maritime fishing capital in Rivière-au-Renard, on which we have been working for more than 10 years with our community partners, instigators of the project. Developed with the committee behind the project and in collaboration with the Mi'gmaq First Nation, this project will be one of the major points of interest of the future tourist site. It will be a unique experience highlighting modern fisheries and the place they occupy in our capital of maritime fisheries, Rivière-au-Renard,” proudly mentioned the mayor of Gaspé, Daniel Côté.

The concept will provide visitors with an immersive experience in a cinema-style room where the benches will move and shake to make the waves and the vibrations of the engine felt, where the natural elements will be reproduced with the characteristic mist, rain and smells from the sea. The community of Rivière-au-Renard will be highlighted since it is their reality that will be told. The project will also give pride of place to the Nation of Gespeg as an integral part of the modern fishing industry. The immersive experience project is worth $600. It includes the construction of the hall in the Robin building, recently acquired by the City, the artistic design and the necessary equipment. The room is designed to accommodate about fifteen people at a time.

About the Capital of Maritime Fisheries of Quebec project

The Capital of Maritime Fisheries of Quebec project has been worked in collaboration with the Corporation de développement de Rivière-au-Renard for more than 10 years. It aims to revitalize the center of the village of Rivière-au-Renard by developing a promenade, public squares, an observation tower, water games and interpretation on historical and modern fisheries. A second call for tenders for the infrastructure component should be published in the coming weeks.