2022 ELECTORAL CAMPAIGN: THE CITY OF GASPÉ SHOWS ITS EXPECTATIONS TOWARDS THE NEXT GOVERNMENT 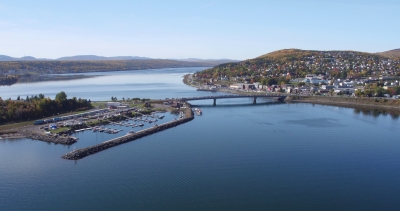 The next Quebec government will be elected on October 3, 2022. The City of Gaspé wishes to make its expectations known to the various political parties and to the candidates vying for the position of MNA for Gaspé in the National Assembly. Several files have advanced over the past 4 years, but several others must also be on the agenda of the next government to allow the City of Gaspé to continue its economic and demographic growth and improve its living environment.

“Several issues must be on the agenda of the next government. For the City of Gaspé, one of the files that could not be settled and which is stagnating at the moment is that of a new arena. It is imperative that the next government commit to reinstating a funding program that will allow municipalities to carry out arena projects in Quebec. The one in Gaspé is at the end of its useful life and, at present, no one can tell us how many more years we will be able to find parts to operate the obsolete refrigeration system. I expect local candidates to speak out on this issue and support us in obtaining funding as quickly as possible to begin construction of the new sports complex,” said Mayor Daniel Côté.

Municipal construction and operating costs are skyrocketing with galloping inflation, as they are for all citizens. However, it is the governments of Quebec and Canada that benefit from the rise in prices with their revenues from consumption taxes such as the QST and the GST and income taxes that are rising more rapidly. The method of financing municipalities, based largely on property taxes, does not increase as quickly as inflation; the tax system needs to be reviewed. Like the UMQ, the City of Gaspé is asking the next government for one-time assistance to offset inflation, before the next municipal budgets, otherwise the cities will not be able to absorb all these expenses without incurring pay the price to the taxpayers, already taken by the throat by this same inflation.

“The property tax system has reached its limits for the municipal world. The next government must be able to work with the municipalities to find alternatives to this mode of taxation and new funds for the cities. Quickly, a one-time sum will be needed to lessen the impact on the budgets for the year 2023 of the municipalities,” demanded the mayor of Gaspé.

“Gaspé is experiencing strong economic growth, but this is being held back by shortages of housing, labor and child care spaces. For childcare services, good work has been done, with 184 additional spaces granted over the past year for the Gaspé territory. Everything must be put in place to accelerate its deployment. We will also have to continue to be agile and grant more, if the need arises with the massive influx of new workers, since our economic vigor will not run out of steam anytime soon,” explains the mayor of Gaspé, Daniel Côté.

On the labor side, governments absolutely must be able to speed up the process of regionalizing immigration. It turns out, for the future of our regions and certainly for the City of Gaspé, a promising solution for its development. The aging of the population will first be felt in the regions; the arrival of newcomers is part of the strategies adopted by the municipality. The government must be able to put in place clear incentives so that people who immigrate to Canada know that regions like ours are ready to welcome them. Integration into Francophone culture is also more natural in the regions.
“Finally, if we want to welcome new families and new workers, the government must step up its pace in supporting housing construction, particularly social and affordable housing. The programs in place should enable promoters in the region to quickly launch social and affordable housing projects. The deadlines are still too long and an effort of modulation is also needed in the programs to reflect the higher construction costs in outlying regions like ours. There are also adjustments to be made to the various laws and regulations in order to remove certain obstacles to housing development, as we experienced recently with the Ministry of Natural Resources in Gaspé. If housing is a priority for the next government, it will have to remove all the obstacles and help us meet this challenge,” said the mayor.

The City of Gaspé will send all of its demands (appended to this press release) to each of the candidates running in the electoral division of Gaspé. The mayor also invites each candidate to meet with the city council over the next few weeks.

List of priority files identified by the City of Gaspé

➢ Quickly put in place an assistance program for the construction of major sports infrastructures, such as sports complexes, in order to materialize the project for a new sports center for Gaspé;
➢ Increase the rates of assistance to municipalities to offset the additional costs generated by inflation, and adjust the amounts of assistance on files in progress to take inflation into account;
➢ Adjust the programs to the realities of outlying regions where construction costs are higher due to transport and the presence of monopolies in certain key sectors (asphalt, concrete, etc.).

➢ Regionalize immigration and put in place incentives to ensure the deployment of newcomers to places with labor needs, including our region.
➢ Improve the Accès-Logis program and the PHAQ (for social and affordable housing) by recognizing regional specificities (in the region: higher construction costs / lower rent prices);
➢ Establish a support program for private housing in the regions (in the regions: higher construction costs / lower rent prices);
➢ Establish incentives for the construction of houses by young families (like what the City of Gaspé does by reimbursing transfer duties for young graduates).

➢ Reassess the programs put in place to generate demand on the airlines and make the necessary adjustments to ensure reliable, affordable and accessible air service, in concert with the carriers;
➢ Complete investments on the railway to Gaspé for goods and passengers and hire additional engineers to speed up its repair;
➢ Continue SPBSLG's investments and development efforts to maximize the development of the Port of Sandy-Beach;
➢ Improve road investments in the Gaspé and Côte-de-Gaspé sector, particularly in sectors where public safety is at stake;
➢ Improve support for public and intercity transit in the regions;
➢ Recognize intercity transport in the regions as an essential service and review the business model accordingly;
➢ Support the establishment of a maritime link between Gaspésie, Anticosti and the North Shore, a project led by the Port of Havre-Saint-Pierre;
➢ Grant the financial assistance expected by the City for the complete repair of the detour road in Pointe-Navarre.

➢ Put in place structuring actions to protect our vital infrastructures such as Route 132, our riparian environments from the erosion of the banks;
➢ Solve once and for all the problem of erosion in the heart of the village of L'Anse-à-Valleau, a file that has been dragging on since 2016, and allow the shoreline to be protected there with a view to a long-term vision;
➢ Adopt a better prevention approach in erosion cases and adopt a global and long-term vision for the protection of our infrastructures;
➢ Equip municipalities in the climate change file to be better able to identify the best actions in terms of prevention and adaptation.

➢ Quickly grant ad hoc assistance to municipalities to offset the effects of inflation before the next municipal budgets;
➢ Make commitments to review municipal taxation and diversify municipal revenues, in a predictable, flexible approach and with less paperwork, during the next fiscal pact.

6- Support for our economic sectors

➢ Recognize the historic site of Berceau du Canada (where the Jacques-Cartier cross was planted) and support it financially;
➢ Pursue cultural agreements with the MCCQ;
➢ Increase envelopes for heritage protection and act in collaboration with Quebec municipalities on this issue.