To the qualified voters entitled to have their name entered on the referendum list of the following sector of the municipality: ward number 6, (Sandy-Beach, York, Haldimand and Douglastown) and according to the following sketch : 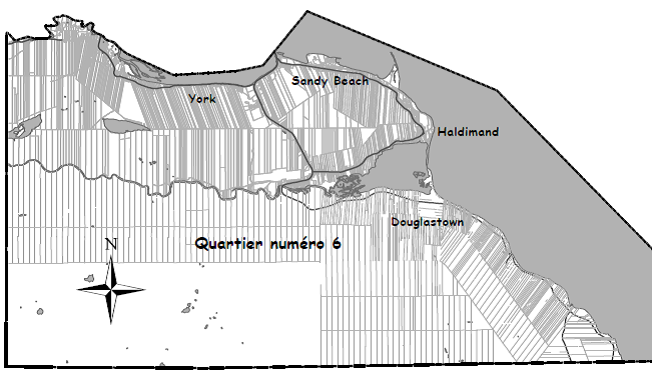 PUBLIC NOTICE is hereby given by the undersigned, Clerk of Ville de Gaspé, that at an ordinary sitting held on December 16, 2019, the Town Council has adopted the following By-Law:

THAT the persons qualified to vote on the By-Law on the date of December 16, 2019, and who have therefore the right to demand that this By-Law be submitted to a referendum poll will have access to a register open for that purpose from nine (9) hours to nineteen (19) hours on January 8, 2020, at the office of the undersigned, at the Town Hall in order to enter their name, address and occupation together with their signature.

A person who, on December 16, 2019, is not disqualified from voting according to article 524 of the Act respecting elections and referendums in municipalities and meets the following requirements:

·        a natural person domiciled in the municipality and, since at least six months, in Québec and

·        is of full age and a Canadian citizen, and not under curatorship.

·        is the owner of an immoveable or sole occupant of a business place situated in the municipality since at least 12 months;

·        in the case of a natural person, be of full age and Canadian citizen and not under curatorship.

·        is the undivided co-owner of an immoveable or co-occupant of a business place situated in the municipality since at least 12 months;

·        is designated by means of a power of attorney signed by a majority of the persons who are co-owners or co-occupants since at least 12 months, as the one who has the right to sing in their name and to be entered on the referendum list of the municipality. This power of attorney must be produced before or at the signature time.

·        have designated by resolution among its members, directors or employees, a person who, on December 16, 2019, and at voting time, is of full age and Canadian citizen, is not under  curatorship and is not disqualified to vote.

THAT the persons qualified to vote on the By-Law in question must establish their identity to the responsible person for the register, by presenting, among others: a health-insurance card issued by the Québec Health Insurance Board, a driver’s permit issued by the Québec Automobile Insurance Society, a Canadian passport, an identity card of the Canadian armed forces, a certificate of Indian status.

THAT the number of applications needed in order that a referendum poll be held is 334 and failing this number, the concerned By-Law will be deemed approved by the qualified voters.

THAT the result of this registration procedure will be announced on January 8, 2020, at 7 pm, at the office of the undersigned, 25, rue de l’Hôtel-de-Ville in Gaspé.